Somehow, the other day, I found myself in front of a TV, instead of a laptop, screen. I can’t now – even as I sit here back in front of the said laptop screen – remember what I was watching or how I thought I had the room in my to-do list to park it and zone out. Now, I’m going to say that I was catching the headlines and keeping up with current events. But, in all likelihood, I was rewatching Clark Griswold struggle to get his “exterior illumination” on.

What I can confirm watching – for the gazillionth time – was a commercial. A specific commercial that made me stop and actually wonder how many times I had seen it and what makes Hershey’s apparently immune from the pressure to crank out new content on a regular, but seemingly never fast enough, basis.

You know what I’m talking about. The frenetic heap of Hershey kisses, all arranged as handbells in the shape of a Christmas tree, “ringing” out the tune of “We Wish You a Merry Christmas.”

I’ve got nothing against this commercial – it’s adorable – but as a new business owner of a content creation agency, I’m constantly thinking about all things new, fresh, creative, cutting-edge… and so was struck by the realization that Hershey’s is keeping it classic.

And has been for quite some time. Like… since I was 7 years old. Downright vintage, if you ask me. Part of my interest in finding out more about this commercial comes from my unreliable memory, relative to my childhood. Having spent much of my life living abroad and only visiting family Stateside over summer vacation, I was always kind of behind the curve when it came to what my cousins had either watched on TV or listened to on the radio (or a sweet yellow Walkman). What I mean to say is, the narratives surrounding American pop culture are not something I take for granted given my significant absence from American soil.

So, rather than wonder about the origin story of the Hershey’s Kisses Christmas commercial, I Googled it. 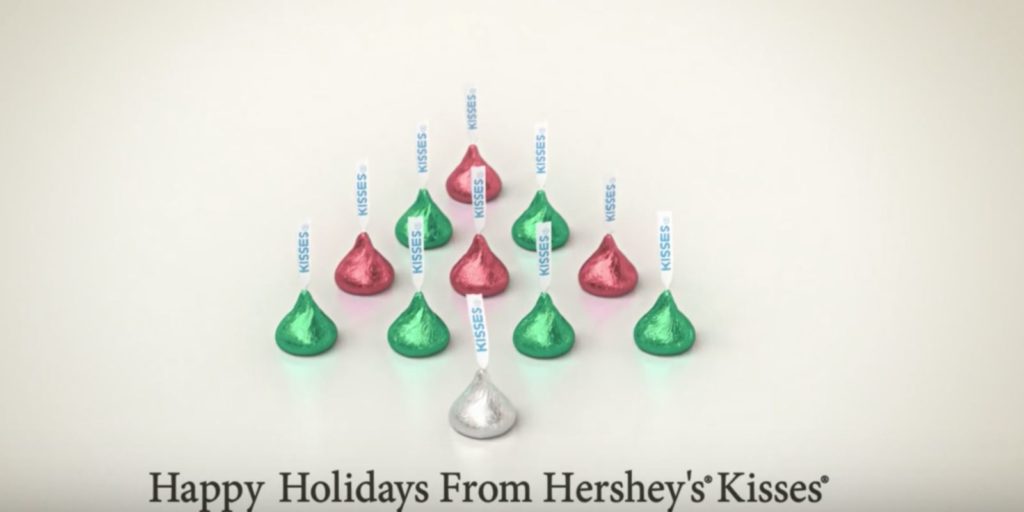 The story goes that, back in 1989, former Hershey Chocolate brands manager, John Dunn, was tasked with creating a new marketing campaign for the Kisses candy. It was called the “Whimsy” campaign and I want one for my business because you just don’t hear that word enough today.

Upon his visit to San Francisco to check the progress of the commercial campaign, Dunn put in a request for a holiday-themed commercial – an add-on that had yet to be approved by his boss. Convinced the commercial would be a crowd-pleaser (though there is no way Dunn could have predicted its continued success, nearly 29 years later), Dunn pursued this extra bit of “Whimsy,” and voila! The American public was gifted with Christmas-wishing chocolate candies.

The interesting detail that sometimes gets overlooked, but represents a major nod the Hershey’s brand identity, comes at the tail end of the commercial. One exuberant Kiss is rocking out hardcore – his bell will resonate above the rest! – and upon nailing the final note, wipes the feverish sweat away from its forehead, courtesy of the handy tag festooned atop its head. If you listen closely, there’s even a barely audible “phew.” Job done!

According to Dunn, this sugary energy and small, but authentic, gesture was right on brand with the whimsical and earnest innocence that Hershey’s associated with its identity.

Confidence in a Classic

With the new year only ten days away, it’s clear that Hershey’s isn’t going to change up this campaign celebrating Christmas anytime soon. Maybe we should all place bets on how long this commercial – Hershey’s longest running commercial ever – will continue to define our holiday viewing pleasure.

No matter how long it lasts, the connection to an audience that can remember listening to music on a Walkman, instead of an iPhone, befits the nostalgia of the season. And maybe that’s the secret to its success. Not just authentic brand representation, but an authentic connection to consumers.

Cheers to a classic!

And from the Waypoint Writing team, “We Wish You a Merry Christmas and Happy Holidays, too!” Phew!

In the Constant Quest for Fresh Content, an Argument to Keep it Classic {VIDEO}