Regardless of whether or not you consider Valentine’s Day a Hallmark invention designed to boost profits benefiting the corporate greeting card sector, or you sincerely try to fashion yourself as a glaring bull’s eye for cupid’s arrow, the supposed history — compared to the here and now — of Valentine’s Day do not match up. But take heart, the disparity between these two realities should be considered a sustained stroke of marketing genius.

So, here’s the gist of how Valentine’s Day, February 14th, came to be a celebrated date on the current calendar. Let’s flashback to the 3rd century AD. Claudius II ruled Rome with an iron fist. One of his absolute no-nos was allowing his military muscle to marry the “fairer” sex. The emperor believed in brawn over beauty, freedom, peace, and love (aka the Bohemian motto), fearing that marriage would weaken his military and turn them soft.

Ahem… quite the opposite there, Claudius.

Anyway, upon discovering that a priest by the last name of Valentine (debatable spelling) was helping his soldiers marry local mavens, Emperor Claudius II (begs the question — what was the first version like?), ordered Valentine’s execution. Class-y. Basically, we’re talking Love Actually meets Game of Thrones.

Obviously, an execution would put an end to forbidden marriages, but it also simultaneously cemented Valentine as a martyr in the eyes of bohemians and all those who value love… including Hallmark. And there is just nothing like forbidden love to boost sales… But we kind of got ahead of ourselves.

Valentine’s Day used to be much, well… grosser.

Prior to crazy-ass Claudius’ plan to put a stop to marriage in defense of his military might, the Romans were already rocking out from February 13th through the 15th, in honor of the feast of Lupercalia.

Simply sacrifice a dog (a dog!) and a goat, whip a bunch of naked broads with the hides of said sacrificial animals and behold! You’re smack dab in the thick of the feast of Lupercalia, which supposedly made those maidens more fertile. Yep. That’s just science, kids.

Fortunately, come the 5th century AD, Pope Gelasius (father of Galentine’s, perhaps?) did away with Lupercalia and decided to replace it with the feast of St. Valentine on February 14.

Neat. Nothing like the needless sacrifice (of animals and humans) to really inspire a consideration and celebration of love and respect for our fellow creatures.

Okay… not quite yet.

Delivered by a Duke

Granted, much of the Valentine’s Day history is grounded in supposition; however, if we take a story for its face value, Charles, the 21-year-old Duke of Orleans, sent a card — now considered the first Valentine’s Day card — to his young wife during his imprisonment in the Tower of London. This first letter, or poem, would ultimately culiminte in a total of 500 in his lifetime.

So, if Chuck got the ball rolling, it’s safe to say that poetic masters like Shakespeare and Chaucer marketed that first Valentine into… a thing. In light of both writer’s successes, St. Valentine’s Day took on a commercial significance, owing to its emphasis on giving gifts and matching up with the “right” puzzle piece.

Of course, all this romantic merriment took place across the pond, so — How did the “holiday” ever reach American soil?

According to Big Think’s How Did Valentine’s Day Become So Commericial — and is it a bad thing? Teodora Zareva explains, “What helped St. Valentine’s Day take root across the ocean in the United States was the nation’s emerging consumer and popular culture, boosted by the influence of advertising and the following developments in printing and mass production.”

Pretty sure us marketers would sum that up as opportunity knocked.

Target Your Next Opportunity 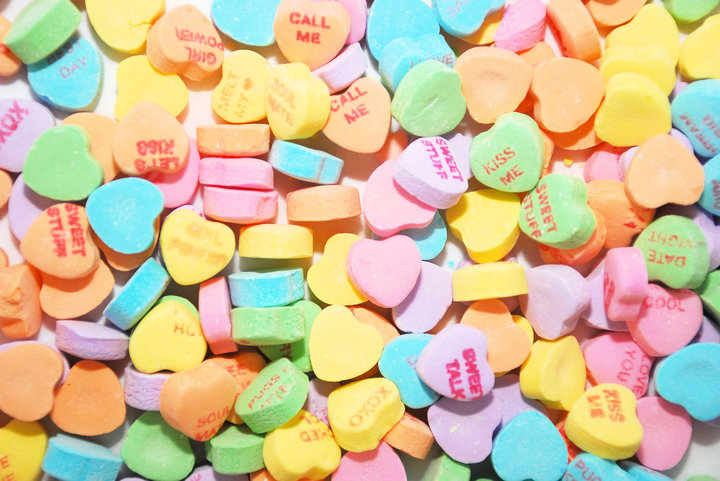 Between advertising and the mass production of just about whatever you can dream of, the sky really is the limit when it comes to profiting off new ideas. Hell, even tired ideas are still crushing it.

A popular wedding favor, guests could expect the hearts to read judgmental statements like “Married in satin, Love will not be lasting.” Or, “Married in pink, He will take to drink.” Um, okay. Of course, who could forget the timeless, “Married in white, You have chosen right.” Oh yeah, that last one’s proven itself foolproof, alright.

Forget the messages, the Necco sweethearts campaign is clearly legit, given that “More than 8 billion of the candies are manufactured each year—that’s about 100,000 pounds per day.”

Wait. It gets worse.

According to Country Living’s, 10 Things You Didn’t Know About Candy Conversation Hearts, “Necco’s marketing director Aimee Scott told Smithsonian that Sweethearts account for roughly 40 percent of the Valentine candy market. It’s estimated that 13 million pounds of the hearts are sold in the six weeks just prior to the holiday.”

Just when you thought Valentine’s Day couldn’t get any grosser!

A Real Heart On?

Believe it or not, the Sweetheart, aka Motto heart, messages have, in some cases, withstood the test of time. A few everlasting sentiments include “Be True,” “Be Mine,” and “Kiss Me.” Necco decided to resurrect “The One I Love” in 1997, courtesy of its 150th anniversary; however our favorite remains the throwback released in 2014, “Let’s Read.”

The point of this saccharine post is to remind you that any story, marketed the right way, could turn into a movement. But remember, the meaning behind any narrative, however real or fake, is always up for interpretation. Your job is to craft a compelling story that connects with your audience. Do you know what your story is? Can you identify your audience? Are you up for either task?

You needn’t sign on for either duty. The marketing team at Waypoint Writing loves stories, loves our clients, and loves any chance to prove that our talents do, indeed, perform on a larger stage. Give us the chance to market your story and charm your clients by contacting us via phone or email.